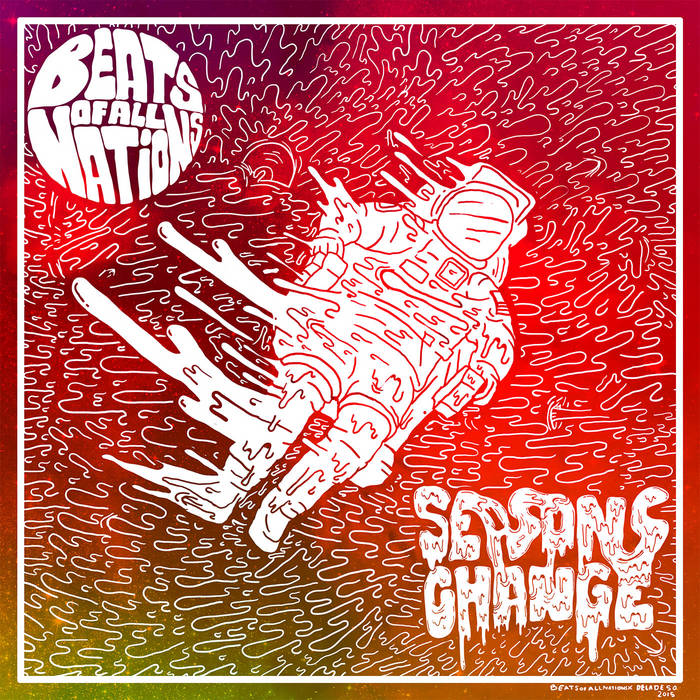 Joel Davis Is The Vibrarian

Beats of All-Nations: Seasons Change is a 13-track feature compilation of beats and compositions. On this collection we are revisited by artists whom we’ve worked with in the past, and several of which making their Beats of All-Nations debut. Following the success of his album In the Moment, Makaya McCraven, a pioneer in the new jazz era offers the live-drum heavy “Midman.” Bombay Da Realest, producer of Blu’s Good to Be Home album, hits hard with the funk inspired “Dig This”. Sev Seveer, the highly creative abstract hip hop manufacturer of our first official release, Constant Elevation: Odessa Star, returns with vocalist Megiapa on the vibed out “C.S.G.” International sounds however are not forgotten by Co. Fee on the Brazilian inspired “White Sands.” The compilation comes complete with exclusive artwork designed by Deladeso.

Beats of All-Nations, founded by Mike Styles in 2009, did not set out to be a label, nor have we conformed to that title. We are a community of artists, producers, deejays music and culture enthusiasts. Our operation is small, though we are represented by many with a goal to continuously raise the bar while keeping the art diverse and the vibes just right. We feature artists you may already love, but especially those you may have never heard before. Along the way, we have given independent artists a voice and an open space to create while introducing them to new audiences. Beats of All-Nations’ very own Porchlite gets busy on the smoothed out “Where are the Roses.” French producer 7even Sun, of our second release Escapologies and our veteran engineer Choco also supply some enlightening rhythms to the project. Other contributors include wave Groove and DJ Erok of Void Shift, Radius (Etc. Records) and Repeated Measures (New Los Angeles/Beat Cinema). The comp opens with music by Aux Voyager and closes with a colossal tune by SLEEP TO STATIC, two veteran producers from our community.

Visit our site for more, including events, feature podcasts and more!
www.beatsofallnations.com.

Est. 2005, Beats of All-Nations is an organization based on the preservation of cultural relevance through music, arts and the international community.

Bandcamp Daily  your guide to the world of Bandcamp

outré black metal, with a Victory Over the Sun interview and music from Liturgy and Jute Gyte.